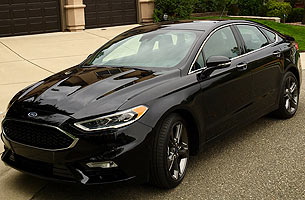 Impressive Ford Fusion Holds Its Own

Roseville, CA- It didn’t take long for the Ford Fusion to gain popularity. The midsize sedan debuted in 2006 and a dozen years later the vehicle is still included among the heavyweights in its class.

The midsize sedan class has many solid vehicles – the competition is fierce. The segment includes Honda Accord, Chevrolet Malibu, Mazda 6, Toyota Camry; Volkswagen Passat, Kia Optima and Nissan Altima. From this vantage point, these are all very good vehicles.

Although historically the Fusion has fared well in the midsize sedan category, its sales dropped dramatically in 2017 (209,623) and are even worse through August 2018. A modest revamping apparently didn’t help. The 2017 Ford Fusion added numerous updates and also unveiled the Fusion Platinum, a power-laden, luxury edition with some cool upgrades. There were no changes for the 2018 Fusion Hybrid.

Proceed with caution when car shopping for a Ford Fusion. There are multiple versions of the popular midsize sedan and all of them have a good upside.

We recently tested the 2018 Ford Fusion Hybrid and came away impressed for a variety of reasons. But there are two other distinct versions of the Fusion: the sedan with a gas-powered engine and the plug-in hybrid technology Ford Fusion Energi. There’s also lots of variety when choosing an engine – there are six different ones among the Fusion line.

The Hybrid engine is a 2.0-liter, four cylinder that combines with the electric motor to produce 188 horsepower. It goes 0-60 mph in 8.5 seconds – a full second slower than the Camry Hybrid – yet feels like it’s faster. The good news is the Fusion Hybrid runs forever, thanks to getting 41-44 mpg.

The Fusion is available in four trim versions (S, SE, titanium, Platinum). It is a spirited sedan that also possesses athleticism, so it’s fun to drive. The solid handling puts the driver in a good state of mind in terms of control in all driving situations – freeway, around town, and even on a challenging zigzag back road. The Fusion Hybrid takes corners well, the steering is very precise, and the ride is solid.

We’re also a fan of the Fusion interior that features a stylish cabin that looks cool and is very efficient. Front row seats offer numerous adjustments -10-way driver, six-way passenger – to help insure comfort, and there’s good head and leg room as well. The back seat is fairly roomy for three passengers. One downside is the angled rear window could be an issue for taller folks.

Note that the trunk, which contains the sizable battery pack, has limited space (12.0 cubic feet) and it’s difficult to store anything very large due to its odd configuration. However, the trunk was able to store a golf bag just fine, even though the “top self” can be a bit problematic.

We’ve been a fan of the Ford Fusion since its beginning and have a positive take on the Hybrid version. It has considerable upside that includes good performance, terrific gas mileage, and well-designed interior.

Overall, the Fusion Hybrid holds its own against most of its rivals.