Six years ago, Ford unveiled a fine midsize sedan in the Ford Fusion and backed it up several years later with the Fusion Hybrid, another quality automobile.

But give Ford credit for not resting on its laurels. Last year, Ford decided on a redesign and went a step further with the Fusion, adding the Energi to the mix. The Fusion Energi is an extended-range, plug-in version of the hybrid model.

The range allows the Energi to travel totally on electric power for approximately 21 miles before shifting over to normal operation. Running in electric mode for those 21 miles, the Energi gets an amazing 100 mpg. And the Energy is capable of maxing out at 85 mph.

Before you get too excited, note that after 21 miles the Energi has to be plugged in and recharged. The folks at Ford state that the battery can be fully charged in 7 hours with a 120-volt power source and in 2 1/2 hours using a 240-volt source.

But if electric power and driving very short distances does not fit your needs, the Fusion changes over to normal hybrid operation. And overall the Energi gets approximately 41-44 mpg, which is only several miles less than the Fusion Hybrid’s 47 mpg average.

The Fusion has been a nice addition to the Ford lineup, providing versatility to the once struggling American automaker. Aided by the success of this family-friendly sedan, Ford posted its biggest annual profit in more than a decade with its fourth quarter earnings for 2010.

Introduced in 2007, the Fusion has certainly evolved. Last year, the five-passenger, midsize sedan added a wider grille, new wraparound headlamps and a few more subtle changes that gave it a sleeker overall appearance.

All 2014 Fusions are built on a new platform that Ford says is more rigid and safer than ever. Now in its second generation, the Fusion has a wheelbase that’s nearly five inches longer than the first-generation. Overall body length is an inch longer, plus an inch wider and taller.

The Energi has a 2.0-liter, four-cylinder engine that produces a combined 195 horsepower. The performance is more than enough in most driving situations. Like the other Fusion models, the Energi provides agile handling and a quiet, comfortable ride.

While there is plenty of room for driver and passengers, the Energi does come up short in trunk department space, thanks to its larger battery pack. The luggage capacity is only 8.2 cubic feet, which is about half of what the regular Fusion provides and four feet less than the hybrid.

Ford will certainly give car shoppers something to think about when considering the Fusion, due to its three great options. The pick here is the Fusion Hybrid, because it gets the best gas mileage and costs more than $8,000 less than the Energi. 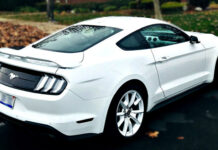