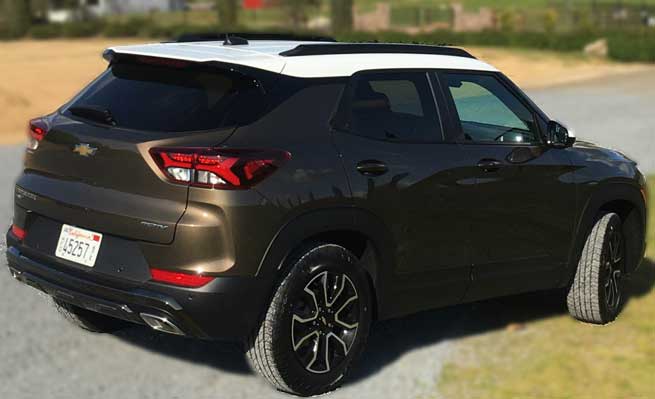 How will new Chevy Trailblazer fare?

Roseville, CA- Think you know the Chevy Trailblazer? Think again. There are dramatic differences between the old TrailBlazer and the latest version.

One possible cause for confusion is the TrailBlazer could easily be misidentified as the larger Chevy Blazer. Both sport utility vehicles were discontinued, then resurfaced. Chevy reintroduced the Blazer last year and was rewarded with sales of 58,115. It hopes for similar success with the all-new 2021 Chevy Trailblazer.

There are dramatic differences between the previous Trailblazer and the latest version. The 2021 Chevy Trailblazer is a lot smaller – a subcompact crossover SUV (the former was truck-based) – that looks nothing like the original. The new version also has an appealing starting sticker price of around $19,500.

The Trailblazer slots between the smaller Chevy Trax and the larger Equinox. The Chevy design team smartly built the Trailblazer with exterior similarities to the popular Camaro, giving it a cool, edgy appearance.

Another appealing aspect to the Trailblazer is the off-road capability of the Activ trim level model. It won’t rival the extremely capable Jeep Trailhawk, yet the all-wheel drive Trailblazer Activ will deliver if taken off paved roads.

The Trailblazer Activ has an 8-inch ground clearance and comes equipped with revised shock absorbers, specialized all-season tires, and has two-toned roof rails. The towing capacity isn’t much – a maximum of 1,000 pounds.

AT A GLANCE – 2021 CHEVROLET TRAILBLAZER

Available in five trim levels (L, LS, LT, Activ, RS), the Trailblazer offers a choice of two turbocharged engines – neither one is all that impressive. Although each front-wheel drive engine suffers from turbo lag and performance is lacking, especially in freeway passing situations, the good news is both engines are fuel efficient, resulting in savings at the pumps.

The standard Trailblazer engine is a turbo 1.2-liter, three-cylinder that generates 137 horsepower and 162 pound-feet of torque, and gets approximately 28-31 mpg. The optional engine is a stronger turbo 1.3-liter, three-cylinder with 155 horsepower and 174 pound-feet of torque. It gets an estimated 29-33 mpg and is quicker than the standard engine, going 0-60 mph in 8.7 seconds.

Being a subcompact SUV, the Trailblazer is easy to maneuver in tight spaces and overall has some nice road manners. The steering is responsive and due to its small turning radius, it gives the driver a confident feel in most situations, including a recent trip into snow country.

There is some road noise, even at low speeds that can be an annoyance. Standard safety features include forward collision mitigation, lane-keeping assist and automatic high beams.

There are a number of reasons to applaud Chevy for the Trailblazer interior. For starters, it’s upscale and roomier than most subcompacts. It has a blend of soft and hard-touch surfaces, an appealing, user-friendly 7-inch infotainment system, and offers standard Apple CarPlay and Android Auto integration.

Seating is very comfortable and spacious for front seat occupants, while the back seat is more than suitable for three kids or two adults. The cargo area is above average – 25.3 cubic feet of space that expands to 54.4 cubes with the seats folded to the floor.

The all-new 2021 Chevrolet Trailblazer merits checking out if shopping for a subcompact. It starts at a very reasonable price and offers lots of upside.