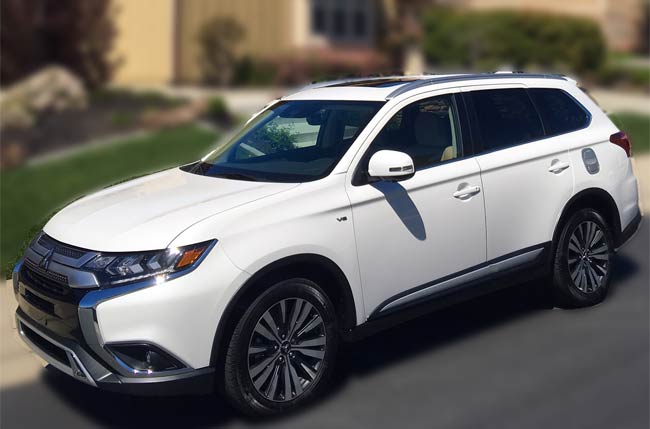 Roseville,CA- The most endearing thing about the 2019 Mitsubishi Outlander? The compact sport utility vehicle can be driven off the dealer lot for a very reasonable price.

Cost-conscious car shoppers should give the Outlander a look because it starts at approximately $24,800 and even a fairly upscale model that’s loaded with amenities can be purchased for just over $32,000. That’s pretty affordable for an SUV that can offer three rows of seating.

However, before one gets enamored with three rows and seating seven people, know that the third row is for children only. No adult would want to be confined to that limited space. But it’s fine for small children who might enjoy being so far away from mom and dad.

The Outlander provides two engine choices. The more powerful one – 3.0-liter, V6 that produces 224 horsepower and 215 pound-feet of torque – is no world beater. But this particular Outlander goes 0-60 mph in 7.8 seconds, about average for the class. Fuel economy is 20-27 mpg.

The less powerful engine is a 2.4-liter, four-cylinder, that generates 166 horsepower and 162 pound-feet of torque. It’s better on gas (25-31 mpg) yet certainly gives up some performance, compared to the V6. This Outlander has been known to labor up steep hills and goes 0-60 mph in a sluggish 9.2 seconds.

The Outlander would make a pretty good companion on long trips with considerable freeway driving. It doesn’t have much cabin road noise, handles well on most surfaces, and offers better than average steering. And if one wants to veer off the main arteries, an Outlander equipped with all-wheel drive is capable of some mild off-roading.

It’s a mixed bag regarding the Outlander interior. Sure, it offers a solid interior, some soft-touch materials and the dashboard is smartly laid out and most people will find it intuitive. But it’s not the least bit techie and behind the times overall.

The first two rows of the Outlander are comfortable, featuring solid leg and head room. The cargo area is small at 10.3 cubic feet of cargo room behind the third row of seats, but expands to 34.2 cubic feet when the third row is folded down.

The affordable price and great warranty – drivetrain is 10 years/100,000 miles – gives the Outlander an edge over some of its competition. While certainly not the top choice in its class, the Outlander keeps getting incrementally better.