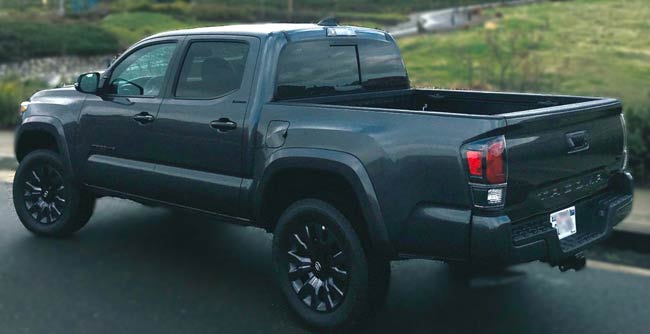 Roseville, CA- Toyota enjoys huge sales numbers in the U.S. and one primary reason is the popularity of the Tacoma.

Reportedly, half the midsize trucks sold in the U.S. are Tacoma models. It has remained the best-seller in its class for the last 14 years.

For more than two decades, the Toyota Tacoma has been a very popular alternative for shoppers who feel full-size trucks are just too big and too expensive. Debuting in 1995, sales immediate took off for the Tacoma. They reached a high in 2019 with all-time sales of 248,801, and followed up last year with 238,806 sold.

The versatile Tacoma also has several configurations, giving truck buyers a choice of the two-door Access Cab or the four-door Double Cab, along with a five- or six-foot cargo bed. Similarly, all but the TRD Pro allow for a choice of rear- or four-wheel-drive.

Despite its enormous sales, the Tacoma has its detractors. The V6 acceleration remains modest, the towing capacity (6,800 pounds) has been criticized as lacking, and gas mileage is still an issue for people who expect more appealing numbers. And it only has a 1,685-pound maximum payload capacity.

One of the most intriguing Tacoma models is the TRD Off-Road. It has a rugged body and special 16-inch alloy wheels that will help absorb the bumps over rough pavement and dirt surfaces. The rugged truck comes with Bilstein shock absorbers and is also equipped with an electronic locking rear differential and the Crawl Control system, which supplies cruise control for off-roading between 1-5 mph.

The TRD Off-Road utilizes a 3.5-liter, V6 that produces 278 horsepower and 265 pound-feet of torque. The engine fails to deliver strong acceleration, clocked at roughly 7.7 seconds going from 0-60 mph. However, the engine improvement has led to better gas mileage (18-23 mpg), plus a smoother and quieter ride than ever before.

The Tacoma lineup has one other engine, a less powerful 2.7-liter, inline-4 that generates 159 horsepower and 180 pound-feet of torque. Despite being a smaller engine, the fuel economy is not much different than the V6 – 20-23 mpg.

Handling is smooth for a truck and the Tacoma is fairly easy to maneuver in tight spots. One issue is the brakes, which feel grabby. Standard on all models are the following safety features – lane departure warning, automatic high-beam control, adaptive cruise control, automatic emergency braking with pedestrian detection, and a driver drowsiness warning system.

Interior highlights include an easy-to-master 7.0-inch touchscreen interface and a fully adjustable 10-way driver’s seat. The interior is more about durability than luxury, but that’s expected in a truck. The front seats won’t be good for all drivers due to a low mounting position and lack of height adjustment. Headroom is limited in the backseat of the crew cab and is comfortable for children only. However, that’s not a problem in the larger extended cab.

The Tacoma has a lockable tailgate. The bed is made of a composite material that doesn’t require a liner, and features a combination of fixed and movable tie-downs. Loading is easy because the tailgate opens low and its bedsides are moderate size.

The 2021 Toyota Tacoma continues to be a good choice for folks shopping for a midsize truck. The TRD Off-Road model is especially impressive because it delivers in many ways for individuals who want a solid truck with some solid versatility.