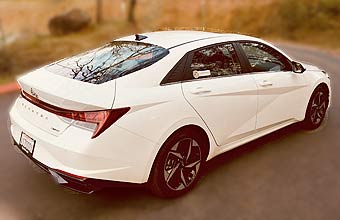 Venerable Elantra named the 2021 North American Car of the Year

Roseville, CA- Sales had been waning for the past five years, signaling that a change may soon be coming for the venerable Hyundai Elantra.

Apparently, Hyundai had seen enough, leading to a full redesign for the Elantra. Congratulations are in order for the designers of this year’s Elantra, which in January was named the 2021 North American Car of the Year. This is the second time (2012) the Elantra has been named Car of the Year. Only two other vehicles – Chevy Corvette, Honda Civic – have won the award more than once.

However, it might not be fair to blame the sales dip solely on the competency of the Elantra, a compact sedan. The entire segment has been faltering for several years, leading to some automakers entirely abandoning their small cars. The popular go-to vehicle segments now are the subcompact and compact SUV.

There’s plenty of reasons to like the 2021 Hyundai Elantra. It arrived with a new platform, bolder styling, and was longer, lower, and wider than the previous model. Also new this year is a hybrid version and the debut of the Elantra N, a turbocharged trim model that is easily the most powerful Elantra ever.

The Elantra N engine is a turbo 2.0-liter, four-cylinder that generates 276 horsepower and 289 pound-feet of torque. It goes an estimated 0-60 mph in 5.7 seconds and has a top speed of 155 mph. The Elantra hybrid has an electric motor, a 1.3-kwh lithium-ion battery pack, and the 1.6-liter, four-cylinder delivers 139 horsepower and 195 pound-feet of torque. The major takeaway is 53-56 mpg.

Despite the lack of performance, we still found the base model pleasant to drive. On a challenging, twisting, hilly road, the Elantra performed well in Sport mode. It’s comforting to know the vehicle is equipped with standard safety features that include lane-departure warning with lane-keeping assist, automated emergency braking with pedestrian detection, and adaptive cruise control with lane-centering feature.

Hyundai has received considerable praise for making Apple CarPlay and Android Auto wireless a standard feature. The Elantra also gets high marks for its well-conceived cabin that is roomy for a compact. The front seat has good head and leg room, while the back seat is improved, adding 2 inches of leg room and is suitable for adults. The cargo area (14.2 cubic feet) is slightly above average among its competitors.

The interior has a standard 8-inch infotainment screen that’s not overly techy, so there’s not a huge learning curve for mastering the nuances. It also has dual-zone climate control and a segment-first digital key.

There’s no arguing that the fully redesigned 2021 Hyundai Elantra has lots to offer at a reasonable price, starting at $19,800. However, the question lingers: are the improvements enough to boost sagging sales?