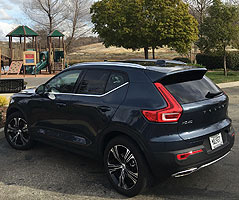 Roseville, CA- One might say Volvo is a little late to the party with the introduction of the XC40 last year.

A luxury compact sport utility vehicle, the XC40 finds itself pitted against some serious competition in the BMW X1, the Jaguar E-Pace and the Lexus NX 300. All three vehicles came out two years or more prior to Volvo developing a compact SUV to join its five-passenger XC60 and larger three-row XC90.

The 2020 Volvo XC40 is nearly identical to last year’s model; changes are minimal and inconsequential. It remains a handsome-looking, small SUV that features a solid upside, has the traditional Volvo safety seal of approval, and the base model can be driven off the lot at a reasonable price ($33,300).

The folks at Volvo got creative regarding the XC40. In mid-October 2019, the former Swedish automaker (it has been owned by the Chinese multinational automotive company Geely Holding Group since 2010) unveiled its plans for its first full all-electric vehicle (EV), a remake of the XC40. The first Volvo EV will be the 2020 XC40 Recharge, a compact SUV that seats five, the same as the gas-powered XC40.

Recharge is a brand name that Volvo will use for all of its chargeable vehicles with a fully electric and plug-in hybrid powertrain. Volvo says every Volvo model in the company’s lineup will eventually have a Recharge model. In the upcoming decade, the Swedish automaker expects to launch a new EV every year and wants half its lineup fully-electric by 2025, an ambitious goal as it starts to phase out gas-powered vehicles.

Enough about the future, let’s head back to the present. One of the reasons we like the gas-powered XC40 is performance. It’s a turbocharged 2.0-liter, four-cylinder that generates 248 horsepower and 258 pound-feet of torque, and is paired with an eight-speed automatic transmission.

The spunky compact SUV can travel 0-60 mph in 6.2 seconds. It also gets 23-31 mpg and can be equipped with all-wheel drive. We found the XC40 eagerly climbed hills and had all the freeway passing power that was needed. With many safety features standard, the XC40 is another Volvo that puts a premium on protection.

The XC40 is also engaging and fun to drive. It can handle itself quite well on a challenging, curvy roads, while delivering good steering capability and strong braking power. Thanks to its generous 8.3 inches of ground clearance, the XC40 can also tackle some mild off-roading. But avoid any rock climbing; the XC40 wasn’t designed for that.

One common complaint is the vehicle’s shifter. It’s annoying. To ignite either the drive or reverse mode requires moving the gear selector twice in that direction. Because of that, one often fails to do it exactly right and the XC40 remains in neutral. Who knows what Volvo was thinking!

Another criticism of the Volvo XC40 is its confusing infotainment system, a trait that many of its vehicles annually possess. This system requires the driver to focus on the 9-inch center touchscreen and less on driving, at least in the learning process. The layered menu structure needs to be addressed.

The XC40 does provide solid comfort for all five passengers and has lots of storage areas for convenience. The cargo area is on the smaller side (20.7 cubic feet), yet expands to 47.2 cubic feet with the seat down.