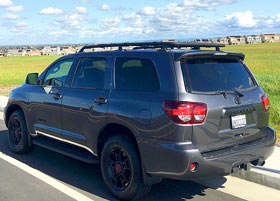 Behind the times as sales continue to dip

Roseville, CA- Change is not always a good thing. But when it comes to the aging Toyota Sequoia, changes would be welcomed. The 2020 Toyota Sequoia arrives with essentially the same exterior look it possessed in 2008, the last time the large sport utility vehicle had a major redesign. This year’s Sequoia has the same V8 engine that’s paired with the same six-speed automatic transmission. The Tundra-based body design and much of the interior is unchanged.

It seems logical that Toyota would take an objective look at the Sequoia and recognize it’s dated. However, we mentioned the same issues in previous reviews and essentially the same SUV keeps coming back year after year.

It would appear that more and more people are bypassing the Sequoia and going in another direction. In 2019, sales dipped for a fourth straight year to 10,289, the lowest figure since the Sequoia’s debut in 2000. And the Coronavirus epidemic is likely to make sales even worse in 2020.

Toyota did make several changes to the latest version of the Sequoia. It received a new 7-inch touchscreen, now has Apple CarPlay and Android Auto integration, and added the TRD Pro trim model that provides some nice off-road chops.

The Sequoia is behind the times in sophistication when compared to other large SUVs. The interior definitely needs to be modernized because it looks and feels antiquated. Even though the touchscreen size was increased, it remains small by today’s standards among large SUVs, and fuel economy is still poor (13-17 mpg).

Those shortcomings are glaring if one considers plunking down between roughly $50,000 to $69,000 for a new Sequoia. The competition includes the Nissan Armada, Ford Expedition, Chevrolet Tahoe and Suburban 1500.

The Sequoia is the longest, widest and tallest SUV in the Toyota lineup. It’s also accommodating by offering lots of small-item storage throughout the cabin. When properly equipped, the Sequoia has a 7,400-pound towing capacity.

There is no diversity with the Sequoia engine – take it or leave it. Thankfully, it’s a pretty good one, a 5.7-liter, V8 that generates 381 horsepower and 401 pound-feet of torque. It possesses freeway passing power and for such a large vehicle, has a very respectable 0-60 mph time of 7.1 seconds. That matches or exceeds many of its rivals.

We liked how the Sequoia handled overall. For a big SUV, it maneuvers OK, has a good turning radius, and is easier to park than some similar vehicles.

It’s very evident that Toyota needs to step up and give the Sequoia a makeover. The full-size SUV still has a decent reputation overall and making some changes may help make it more appealing to car buyers.