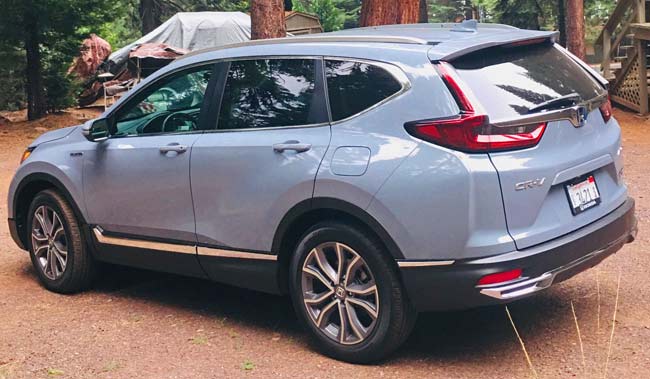 Roseville, CA- After years of venturing slightly into green automobiles, Honda has made a firm commitment for the future.

Honda previously announced that by 2022 it will remove all its vehicles in Europe that rely solely on internal combustion engines. That’s coming from an auto manufacturer that in 2019 had only 7 percent global sales of hybrids.

Last year, the new Honda CR-V hybrid was unveiled in European markets. Successful overseas, the 2020 Honda CR-V hybrid is now available in the U.S. This is not only the first electrified CR-V, it’s also Honda’s first all-wheel-drive hybrid vehicle.

The CR-V has a tremendous reputation and has been the top-selling compact SUV in the U.S. for more than two decades. A year ago, Honda sold 384,168 CR-Vs, second only to the Toyota RAV4, representing the most in its history. CR-V sales have annually exceeded 300,000 since 2013.

With that type of track record, it’s unlikely the CR-V hybrid won’t generate solid sales numbers. With a starting price just under $28,000, the CR-V is priced a bit lower than its two primary rivals – hybrid versions of the RAV4 and Ford Escape.

Part of the fifth CR-V generation introduced in 2017, the hybrid features a roomy interior, secure handling, sufficient performance, is fuel efficient, and every model has AWD.

Offered in four trim models (LX, EX, EX-L, Touring), the CR-V hybrid has one engine choice, a 2.0-liter, four-cylinder that’s paired to a hybrid system and generates a combined 212 horsepower (22 more than the gas version). It uses the same two-motor system as the Honda Accord hybrid and has four driving modes – Sport, Econ, EV, Normal.

Although the CR-V has been criticized by some as having lackluster performance, we found it satisfying on a lengthy mountainous drive where the elevation climbed to around 5,000 feet. The hybrid goes 0-60 mph in 7.5 seconds, gets 35-40 mpg, and travels roughly 665 miles on a single fill-up (14-gallon fuel tank).

The CR-V accommodates five people and gives each one a solid degree of comfort. Up front, the seating affords better than average head and leg room. Since this is not a cavernous SUV, don’t expect tons of room in the back seat. Yet it’s good enough to provide a comfortable stay on long rides and the cargo area (33.2 cubic feet; 68.7 cubes with rear seats folded down) is solid.

One interior shortcoming is the small, outdated 5-inch touchscreen can be fussy to use and doesn’t include a separate tuning knob. Also, Apple CarPlay and Android capability are options.

Priced approximately $2,500 more than the gas-fueled version, the 2020 Honda CR-V hybrid gives folks something to ponder when shopping for the popular compact SUV. The hybrid has standard AWD, good fuel economy, and a comfortable ride.