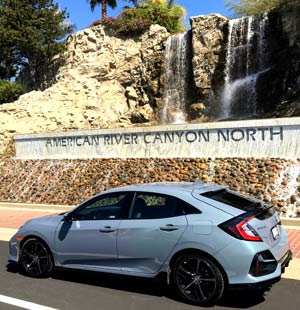 Roseville, CA- After test driving two versions of the 2020 Honda Civic in the past five months, it was hard to take a definitive stance on which one we liked best.

The sporty Civic Si featured an easy-to-shift six-speed manual transmission that was fun to drive. Our second go-round was the Civic hatchback that we loved for its versatility and the ease of driving a car that was equipped with continuously variable automatic transmission (CVT).

Although historically this longtime standout in the compact vehicle class earned its reputation for being well made, affordable, reliable and fuel efficient, the modern-day Honda Civic possesses more than just the aforementioned qualities.

We were taken by surprise at the performance the Civic can deliver. It was fast, not just for a compact car, but for any vehicle. Both Civics tested here featured a turbocharged engine that is capable of going 0-60 mph in 6.3 seconds, putting it in an elite class among compacts.

Honda has been selling tons of Civics for nearly half a century. It’s a legend in the compact class, exceeding sales of 200,000 or more annually since 1989. There were 325,650 Civics sold in 2019, nearly matching the sales total from 2018 (325,760). It’s obvious that many people still want this car because Honda can keep inching up the sticker price and still be assured of selling several hundred thousand Civics a year.

Besides the obvious traits, what people love about the Civic is the diversity. It comes as a traditional compact sedan, coupe or hatchback. For 2020, the 10th generation of Civics offers six trim models (LX, Sport, EX, EX-L, Touring, Si).

There’s been no major redesign since 2016, but minor changes keep taking place because Honda understands there is plenty of competition if the Civic goes stale for several years. Among the competitors are Mazda 3, Subaru Impreza, Kia Forte, Toyota Corolla, Volkswagen Jetta, and Hyundai Elantra.

For 2020, Honda decided to update the Hatchback and Civic Si. In both cases, Honda made front and rear styling updates. Honda says it also reduced the Hatchback’s road noise by providing improved sound insulation.

The Civic interior is well thought out, possessing good space, lots of storage areas, and solid room with the exception of the coupe, where the back seat is not suited for most adults. For safety-conscious folks, the optional Honda sensing suite includes Adaptive Cruise Control, Lane Keeping Assist, Road Departure Mitigation, Collision Mitigation Braking, and Lane Departure Warning.

Regardless of which model one prefers, the 2020 Honda Civic is a high-level compact car that continues to reside at or near the top of its class.