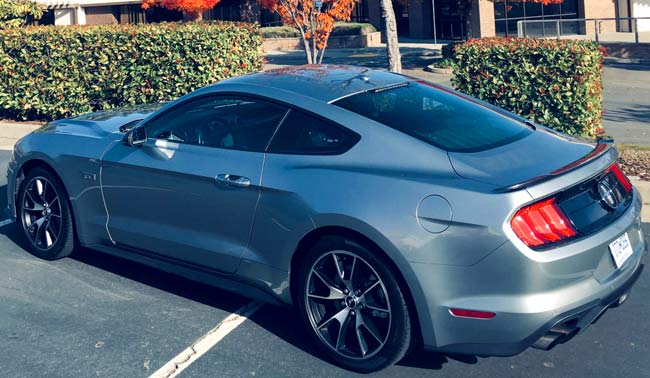 Roseville, CA- Are “pony” cars still relevant? The answer is a resounding yes if one is discussing the Ford Mustang, the first true pony car that was immediately embraced for its brazen look and high performance.

The Mustang has truly been one of America’s iconic cars for the past 56 years. Ford debuted the Mustang in 1964 as the first of the so-called pony cars, which were characterized by being compact, affordable, stylish and most importantly – possessing high performance.

Wanting to capitalize on the new concept, many imitators quickly followed because the Mustang became a car for people who craved performance and wanted to be noticed. A half century later, getting noticed is still no problem.

Through it all, the essential winning formula for more than a half century has remained unchanged: The Mustang is a fast car that’s tons of fun, affordable, and sexy.

Naturally, the modern Mustang is also way more sophisticated than when it was first introduced. The sixth generation Mustang arrived in 2015 with a redesign that has picked up some additional admirers. Sales for 2019 were 72,489, a more than respectable figure for a niche car.

The 2020 Ford Mustang arrives with a few changes; mostly options that are not overly significant, like a new high-performance package, a handling package, and making the FordPass Connect smartphone app standard.

No matter what trim model is chosen, performance continues to be a huge selling point for the rear-wheel drive Mustang. It has three primary engines and each one of them provides pleasing performance.

Ford dropped the V6 engine in 2018. The standard engine is now a turbocharged 2.3-liter, four-cylinder engine that produces 310 horsepower and 350 pound-feet of torque. Don’t be too quick to judge its capability; the turbo model goes 0-60 in 4.9 seconds and gets an estimated 21-30 mpg, the best of the three in terms of making a tank of gas go the furthest.

The Mustang seats four people, but the rear seats are uncomfortable for adults because of limited space, low roof and rear glass. Like all coups, the Mustang entry and exit can be annoying chore, especially for larger folks. The cargo area is decent at 13.5 cubic feet (11.4 for convertibles).

Most buttons and levers are straightforward, so there’s no major guesswork in figuring out the Mustang’s interior layout. The backup camera is a major help, although the Mustang’s visibility is above average for the segment, aided by windshield pillars that aren’t too wide and expansive rear glass that gives a decent rearward view.

If you loved Mustangs of the past, there’s no reason to not purchase one now. The 2020 Ford Mustang still possesses all the qualities that originally made this pony car a huge success.