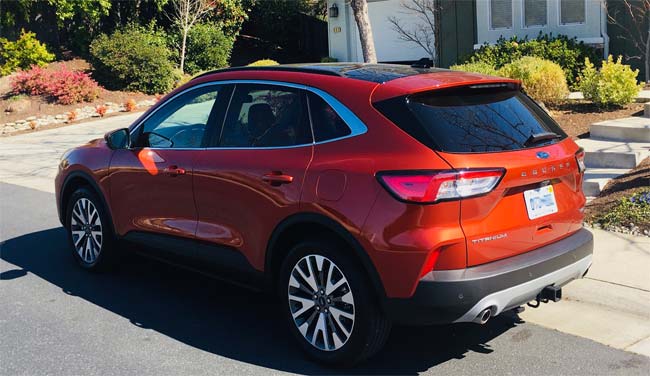 Roseville, CA- Even though it remains a big seller for Ford, this compact crossover sport utility vehicle was starting to lose its appeal.

We’re guessing Ford decided something needed to be done, because the 2020 Ford Escape arrived with a major redesign, the first since 2012. The biggest improvement is this year’s Escape has two new engines, reintroduced a hybrid model, and will unveil a plug-in hybrid some time in 2020.

When they first arrived on the scene around 20 years ago, compact SUVs were an instant hit because of their practicality, versatility and fuel economy. Performance wasn’t a big factor because the small SUVs weren’t too peppy and no one seemed to care. However, over the years that has changed. There’s an influx of small SUVs and U.S. car buyers typically want them with more than a poky engine and mediocre handling.

The Escape delivers in both cases. The base model features a turbocharged 1.5-liter, 3-cylinder that generates 181 horsepower and 190 pound-feet of torque. It goes 0-60 mph in a respectable 7.7 seconds. Another option is the energetic turbo 2.0-liter, 4-cylinder that delivers 250 horsepower and 280 pound-feet of torque. It’s two seconds faster than the base model – 0-60 mph in 5.7 seconds.

The Escape hybrid returns after being shelved in 2012 following a five-year run. The engine is a 2.5-liter, 4-cylinder, that pairs with a hybrid powertrain, and produces a combined 200 horsepower.

Appearance was also addressed in the latest version of the Escape. It is slightly lower, longer and wider than the outgoing model. The three-bar grille was replaced with a honeycomb-like front end and the headlights are now oval. The major rear styling change is wider taillights.

Criticized for its choppy ride quality, the 2020 Escape offers better driving acumen. The Escape provides a smooth ride and can rival some of its biggest competitors – Toyota RAV4, Honda CRV, Mazda CX-5 – in handling itself in a number of different driving situations.

The Escape also has a solid interior that’s valued for a number of reasons. The overall layout is smart and roomy, two qualities one doesn’t always get in a compact SUV. Front seats offer good head and leg room, while the sliding back seat is fairly spacious for two adults – three can be a crowd.

Ford brags that the Escape cargo area can handle four golf bags – that means you can drive the foursome to the links. The cargo area is 33.5 cubic feet and with the back seat folded down it stretches to 65.4 cubes.

The standard Escape has a good overall cabin, yet it’s not devoid of issues. One of them is a smallish 4.2-inch infotainment display with few bells and whistles. The good thing is the display is fairly intuitive. The Escape also gets criticized for having too many hard-plastic surfaces.

We applaud the folks who made for all the positive changes in the 2020 Ford Escape. It’s much improved and has a chance of hiking sales back to its high point.