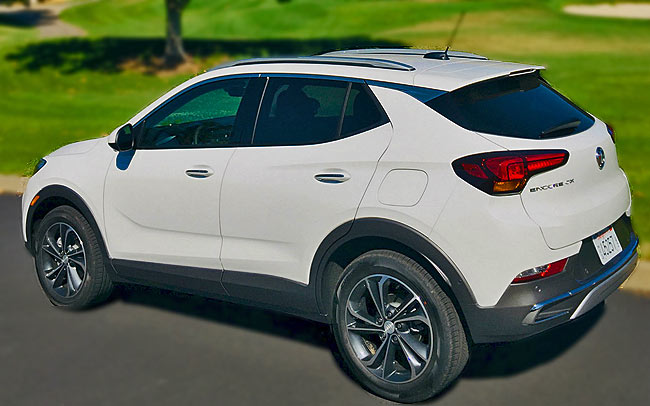 Roseville, CA- In our humble opinion, this isn’t good marketing. Buick came out with a very different version of the Encore this year, so why not give the all-new sport utility vehicle its own unique name?

Instead, General Motors decided to incorporate the existing name, hence the 2020 Buick Encore GX. It’s a confusing naming strategy because despite the nameplate, the existing Encore and the new Encore GX are completely different, yet sold side by side at dealerships.

The Encore GX is larger than the first-generation Encore, featuring a longer wheelbase, is wider overall, and sits slightly lower to the ground. Another oddity is the two SUVs cost almost the same – the base model GX is roughly $1,000 more than the standard Encore. When comparing the two, most will come to the conclusion that the Encore GX is the superior vehicle thanks to its additional features and more elaborate cabin design.

The original Encore debuted in 2013 with modest sales of just under 32,000. The good news for Buick is sales increased every year after, culminating with sales of 102,402 for 2019.

The new Encore GX is not the sole reason the Buick lineup looks different this year. Sedans are out at Buick in the U.S, where the focus is now all about SUVs. GM got rid of more than just Buick sedans. It discontinued the Buick LaCrosse, Buick Cascada, Buick Regal (gone starting in 2021), Chevrolet Volt, Chevrolet Cruze, Chevrolet Impala, Cadillac CT6, and Cadillac XTS.

Equipped with front-wheel drive (AWD is an option) and offered in three trim levels (Preferred, Select, Essene), the Encore GX features an appealing overall design, solid ride quality, good technology, and more passenger and storage room. It’s also priced right – as much as many fully-loaded competitors – and is fuel efficient.

Despite its rather lackluster engine makeup, the Encore X is surprisingly lively. The standard engine is a turbocharged 1.2-liter, three-cylinder that produces 137 horsepower and 162 pound-feet of torque. The optional engine is a turbo 1.3-liter, three-cylinder that generates 155 horsepower and 174 pound-feet of torque. The more vibrant engine is not exhilarating, but it’s not bad, clocked at 0-60 mph in 8.0 seconds.

The Encore GX ride quality is much like its performance. There’s nothing special, yet it will suffice for many drivers. The handling is average and even though its best suited for city driving, it will deliver just fine on more challenging roads.

One gets a little more than most of the competition in regards to interior. The Encore GX is a smartly-designed cabin – especially the optional black-and-beige two-tone color scheme – that uses good quality materials, giving it an upscale appeal.

Seating is not the best because the Encore GX is rather narrow. Three adults in the back seat will be a definite squeeze that should be avoided. Up front, there’s lots more room and comfort, thanks to an eight-way adjustment for both occupants. Behind the second row is more than adequate cargo space of 23.5 cubic feet that expands to 50.2 cubes with the seat folded down.

While not enamored with the naming, we are fans of the new 2020 Buick Encore GX. The GX is priced reasonable for a compact SUV with lots of upside.