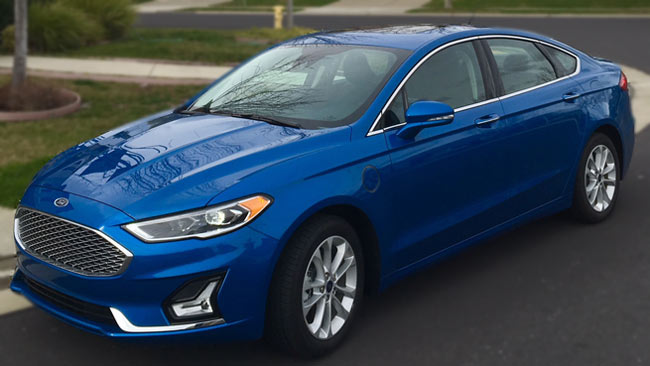 Roseville, CA- Ford has made some nice changes to the Fusion Energi at a time when the future of this plug-in hybrid is in doubt.

Last April, Ford announced that it would discontinue making its line of sedans, instead focusing on what it does best – trucks and SUVs.

However, Ford has remained a bit vague regarding the Fusion lineup. While it announced the Taurus and Fiesta would halt production this spring, there has been no set date for the Fusion.

The rumors have all Fusion production stopping in 2021 and Ford attaching the popular Fusion name to a new sport wagon that resembles the Subaru Outback.

Regardless of its possible impending doom, the Fusion Energi continues on as Ford’s only entry in the plug-in hybrid (PHEV) class now that it discontinued the C-Max Energi.

A larger battery and a longer range are improvements Ford has made to the latest edition of the Fusion Energi, a midsize plug-in hybrid sedan.

The 2019 Ford Fusion Energi, which debuted in 2013, has been refreshed in the hopes of improving sales that were a bit disappointing in 2018. Last year’s sales of the Fusion Energi were 8,074, placing it 10th among electric vehicles sold in the U.S.

In many ways, the Fusion Energi possesses the strong qualities that car buyers value in a traditional midsize sedan, namely a roomy cabin, good fuel economy and solid performance and handling.

While the price is higher than some of its rivals, starting at roughly $36,700, take solace that the Fusion Energi still qualifies for approximately $4,000 in federal income-tax credit for buyers.

The Energi has serious competition from other PHEVs like the Hyundai Sonata and Kia Optima. Both these models have a little better range on a full charge, but can’t match the Energi’s sticker price.

In terms of performance, there are no changes with the Fusion Energi. It comes with a 2.0-liter, four-cylinder engine and electric motor that generates a combined 188 horsepower. It’s capable of going 0-60 mph in 8.2 seconds.

In all-electric mode, the Fusion Energi gets 97 mpge and overall 41-44 mpg. On a single tank of gas, the range is an impressive 500-plus miles.

While there’s no real thrills driving the Fusion Energi, it does deliver a nice ride. It’s relatively quick, smooth and provides good steering and handling, giving the driver a confident feel for the road in all situations.

We’re also fans of the interior that features a stylish, efficient cabin. Note that the Energi trunk, which contains the battery pack, has very inadequate space (8.2 cubic feet) and makes even a normal grocery run a challenge due to its bi-level configuration.

The Fusion Energi has some hard surfaces, but the soft-touch materials seem to be located in all the important places. There’s lots of room in the comfortable front seat and overall the back seat offers adequate space and comfort. Standard Apple CarPlay and Android Auto are included with the Sync 3 infotainment package.

We’ve been a fan of the Ford Fusion since its beginning and also think highly of the Energi. The additional mileage range in all-electric mode is a nice addition and so is the new styling and standard driver-assistance safety package, helping to keep the 2019 Ford Fusion Energi relevant in the PHEV class.