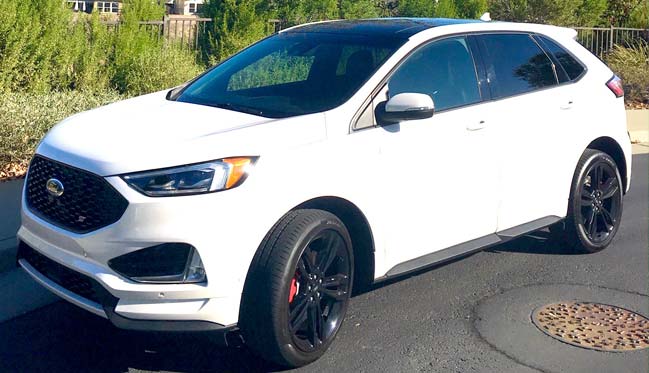 When first introduced in 2007, the Edge was indeed on the cutting edge. It was a competent midsize crossover that became one of the industry’s trailblazers as SUVs veered away from being truck-based to delivering a sedan-like ride.

Despite last year’s success, Ford decided to give the 2019 Ford Edge a facelift. Among the exterior changes to the front were new headlights, grille and lower front fascia. The backside changes included replacing the red connector between the taillights with a black panel and an overall sportier look.

This year the Edge has a new engine with the ST model, one of four trim levels. It also features a new eight-speed transmission that provides an improved gear selection than the previous six-speed. However, what the facelift didn’t address was an interior that is getting dated and still has no third row, so five passengers are the maximum.

Even without a third row the Edge has enough upside to attract its share of SUV shoppers. It’s a bit more upscale than some of the competition, offers a good standard package, and has an appealing sticker price of approximately $30,000. And thanks to its turbocharged engines, fuel economy is another plus.

The standard engine remains a turbocharged 2.0-liter, four-cylinder that generates 250 horsepower and 280 pound-feet of torque. It travels a respectful 0-60 mph in 7.5 seconds and will go a long way on a tank of gas (22-29 mpg).

The new engine addition is a turbocharged 2.7-liter, V6 that delivers 335 horsepower and 380 pound-feet of torque. It’s not as economical as the standard engine (19-26 mpg), but is quicker and more fun to drive in all situations. The ST model comes standard with all-wheel drive and a sportier suspension.

The Edge has always been applauded for offering a smooth and comfortable ride. It’s a controlled SUV that makes the driver easily slip into a nice comfort zone. Steering, handling and braking are all above average for the Edge, which offers a quiet ride with very little wind noise.

Although it features a logical layout, overall the Edge lacks the sophistication of some more technologically-advanced rivals. There’s a lot of buttons and controls to push and hitting the wrong one is not uncommon. The standard 4.2-inch central display screen is rather small but simple to master. Apple CarPlay and Android Auto come standard.

The Edge offers comfortable seating up front with plenty of head and leg room. The back seat is not as roomy yet still accommodates three adults pretty well. With no third row, the cargo area is cavernous, providing 39.2 cubic feet. With the second row down the storage space expands to 73.4 cubic feet. However, the second row doesn’t fold down flat, which can be annoying.