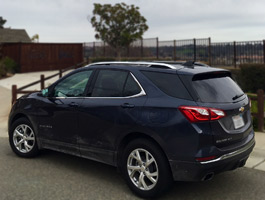 Roseville, CA- Although it still remains a notch behind the class leaders, the Chevy Equinox can point to the numbers for its impact in the compact crossover sport utility vehicle class.

The 2019 Chevrolet Equinox offers few changes from the 2018 model, which arrived with a significant redesign. What we like about the latest version of the Equinox is three engine choices, the smooth ride it delivers, and the sticker price of the base model (approximately $24,000). Note that the standard Equinox has to be a custom ordered, so there’s a wait while it gets built.

The legitimate knocks against the Equinox are few. One of them is a smaller cargo area than many of its rivals and another one is too many interior hard surfaces.

The standard Equinox engine is a turbocharged 1.5-liter, four-cylinder that generates 170 horsepower and 203 pound-feet of torque, matched to a six-speed automatic transmission. Fuel economy is good at 25-32 mpg.

If fuel economy is a primary concern, the choice would be the diesel model, a 1.6-liter, four-cylinder that delivers 137 horsepower and 240 pound-feet of torque, and gets 28-39 mpg. The downside is a sluggish 0-60 mph time of 9.8 seconds.

Although the ride is somewhat bland and overall unexciting, the Equinox gets rated well in terms of driving acumen. It handles especially well on challenging, winding roads, where it supplies a balanced, capable ride. One thing noticed here was the turning radius is not the best in a crowded parking lot.

The Equinox interior is smartly designed and getting to learn it quickly is aided by its intuitive nature. It features overall comfort that won’t have folks weary on a long drive. Up front passengers have good leg and head room. However, the back seat head room is a little tight for taller people due to the panoramic sunroof. Even though cargo space doesn’t match some rivals, there’s still 29.9 cubic feet behind the second row and 63.5 with the seats folded.

A couple of annoying interior features are the limited range of the telescope steering wheel that is unsuited for most average-size drivers. And the vertical air vents on the dash don’t deliver sufficient heating or air conditioning flow.

Judging by its annual sales, there are plenty of car buyers who are able to pull the trigger on the Chevy Equinox. Among its strengths are performance, solid interior makeup, and good driving characteristics.