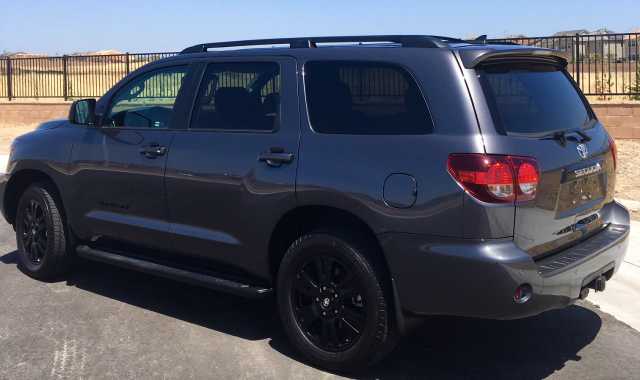 Time for Toyota to Step Up

Roseville,CA- Although Toyota and its luxury brand (Lexus) continue to offer a large variety of quality sport utility vehicles, that doesn’t mean the Japanese automaker can rest on its considerable laurels.

We’ve test driven the Toyota Sequoia several times in past years and always came away with a favorable impression. The lasting impression regarding a recent week with the 2018 Sequoia: it’s time for a redesign. The last one was a decade ago, and that’s a long time by anyone’s standards.

The Sequoia is behind the times in sophistication when compared to other large SUVs. The interior definitely needs to be modernized; right now it looks and feels antiquated. The touchscreen is small by today’s standards, fuel economy remains poor (13-17 mpg), there was no keyless ignition, and no way to pop the trunk with the key fob.

That combination won’t entice car shoppers to plunk down between roughly $50,000 to $65,000 for a new Sequoia. The competition includes the Nissan Armada, Ford Expedition, Chevrolet Tahoe and Suburban 1500.

The Sequoia is the longest, widest and tallest SUV in the Toyota lineup. It can still handle a large family of eight people. It’s also accommodating by offering lots of small-item storage throughout the cabin. When properly equipped, the Sequoia has a 7,400-pound towing power, a figure that several of its competitors can exceed.

There is no diversity with the Sequoia engine – take it or leave it. It’s a pretty good one, a 5.7-liter, V8 that generates 381 horsepower and 401 pound-feet of torque. It possesses freeway passing power and for such a large vehicle, has a very respectable 0-60 mph time of 7.1 seconds. That matches or exceeds many of its rivals.

The Sequoia comes in four trim levels (SR5, TRD Sport, Limited and Platinum). For off-road enthusiasts, the Sequoia has a multi-mode, 4-wheel-drive system.

We liked how the Sequoia handled overall. For a big SUV, it maneuvers fairly well, has a good turning radius, and is easier to park than some similar vehicles.

It’s time for Toyota to step up and give the Sequoia a makeover. The full-size SUV has a good reputation overall and making some changes should help it maintain that status.