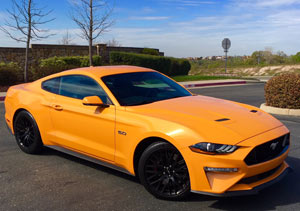 Roseville, Calif. – The Ford Mustang has truly been one of America’s iconic cars for the past 54 years. And with a purposeful new redesign three years ago, there’s little doubt that the Mustang has picked up some additional admirers.

The winning formula for more than a half century remains unchanged: The Mustang is a fast muscle car that’s tons of fun, affordable, and sexy. However, the modern Mustang is also way more sophisticated than when it was first introduced.

Ford debuted the Mustang in 1964. It was the first of the so-called pony cars, which were characterized by being compact, affordable, stylish and most importantly – possessing high performance.

Wanting to capitalize on the new concept, many imitators quickly followed because the Mustang became a car for people who craved performance and wanted to be noticed. A half century later, getting noticed is still no problem, thanks to that satisfying engine growl.

The Mustang developed a following instantly and has gathered many more in its five decades of production, evidenced by the more than 9 million-plus in sales generated over that time span. The Chevrolet Camaro and Dodge Challenger remain the Mustang’s most formidable rivals.

There has never been an issue of mistaken identity with the Mustang. It still features a long hood, tri-bar taillights and sloping fastback, which combine to give it an aggressive appeal.

There were some exterior changes made to the 2018 Ford Mustang. For starters, the grille is lower and has a more forceful look. Ford also reshaped the LED headlights and taillights, and offers a dozen different wheel designs.

That aggressive appeal carries over to the engine, another cherished Mustang quality since inception. No matter what model is chosen, performance continues to be a huge selling point. For 2018, Ford added an automatic 10-speed manual transmission that’s quick-shifting and very smooth. All Mustangs are rear-wheel drive.

Ford dropped the V6 engine this year. It kept the turbocharged model that was introduced in 2015. It features a 2.3-liter, four-cylinder engine that produces 310 horsepower and 350 pound-feet of torque. Don’t be too quick to judge its capability; the turbo model goes 0-60 in 4.9 seconds and gets an estimated 21-30 mpg, the best of the three in terms of making a tank of gas go the furthest.

Although the clutch engagement takes some getting used to, the best way to enjoy driving a Mustang is choosing manual transmission. It gives the driver a much better feel for the road and allows for enhanced confidence in many driving situations. In either manual or automatic mode, the Mustang corners well and has good overall handling.

The Mustang seats four people, but the rear seats are uncomfortable for adults because of the limited space, low roof and rear glass. Like all coups, the Mustang entry and exit can be annoying chore, especially for larger folks. The cargo area is decent at 13.5 cubic feet (11.4 for convertibles).

Most buttons and levers are straightforward, so there’s no major guesswork in figuring out the Mustang’s interior layout. The backup camera is a major help, although the Mustang’s visibility is above average for the segment, aided by windshield pillars that aren’t too wide and expansive rear glass that gives a decent rearward view.

If you were a previous fan of the Mustang, then you’re really going to like the 2018 version because it’s superior to any previous model.