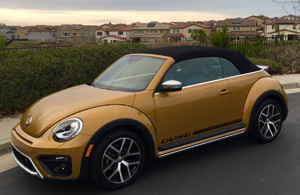 Volkswagen Beetle Dune a combination of style and personality

Roseville, Calif. – Although certainly not the vehicle of choice for everyone, there’s no denying that the Volkswagen Beetle Dune possesses both style and personality.

The Volkswagen “bug” has long been labeled a cute car; and that hasn’t changed. Many women still swoon at the sight of the modern-day beetle, a somewhat quirky car that has retained its very recognizable curvaceous shape.

The 2018 Beetle Dune convertible coupe that was test-driven here was a brightly colored metallic yellow, an unabashed attempt by Volkswagen to say – “look at me.” And many people did. Curious folks were giving the Dune a good once over at stoplights or in parking lots. No question, the Dune certainly has eye appeal.

The Dune convertible has a power-operated folding fabric top that takes just 9.1 seconds to drop down. The Dune is also offered as a hard-top hatchback.

Unlike the old model VW “bugs,” the modern version has more appealing qualities. The 2018 Beetle Dune comes loaded with high-tech features, and one peppy turbocharged engine, which replaced last year’s turbo 1.8-liter. Its only rivals are the less performance-laden Mini Cooper and Fiat 500. The Mini has 134 horsepower, while the Fiat has 101.

Several years ago, Volkswagen brought back the Dune name in trying to awaken memories of its old Dune Buggy, a 1960s roadster that could effectively be driven on sand. That’s not the case with the current Beetle Dune, which features the distinctive bug-like face, honeycomb grille and black stripes on the doors and side mirrors. It’s also a little taller and wider than the older-model Beetles.

Driving the Beetle is more compelling than ever, thanks to the new turbo engine. The lone engine is a turbocharged 2.0-liter that generates 174 horsepower and 184 pound-feet of torque. Matched with a new 6-speed automatic transmission, the Beetle delivers solid acceleration and good passing power.

While the Beetle is sporty and fun to drive, there are complaints with the responsiveness of the steering. Still, the Beetle is quite enjoyable on drives around town and the overall handling is fine for a compact vehicle.

The Beetle Dune offers a basic interior design that’s smartly put together. Volkswagen has a multimedia system that is pretty intuitive and features a 6.3-inch touchscreen with knobs located a convenient distance from the driver. The interior includes multiple storage bins and a center console.

Front seat folks will enjoy comfortable seating and solid leg and head room, despite the low roof line. However, as always with a coupe, squeezing into the back seat is unpleasant and both head and leg room is not good for adults. The Beetle has good cargo space – 15.4 cubic feet with rear seats upright. Note that convertibles have less than half that room, so storage is an issue.

The iconic Volkswagen Beetle Dune will attract its share of car buyers with its cute appearance and fun-to-drive appeal. It doesn’t hurt that it’s offered at a fairly reasonable price.