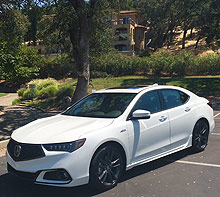 Plenty of reasons to admire the 2018 Acura TLX

Roseville, Calif. – It was a luxury sedan that was missing that luxury look. Now the Acura TLX has it, thanks to a modest redesign this year.

There’s plenty of reasons to admire the 2018 Acura TLX. It rides quiet, is roomy, offers lots of cool features, passes the performance test, and now features an attractive look.

The Acura brain trust focused on the exterior and enhanced the front end by putting in a pentagon-shaped grille and adding sharper LED headlights. The TLX was certainly noticed in my work parking lot, where multiple people did the double take and nodded their heads in approval regarding the new styling.

Acura unveiled the TLX in 2015 as a replacement for the TL and TSX sedans. Good move – neither one was moving the needle in a tough field of midsize luxury sedans. The goal was to combine the best qualities of both in the new TLX. Although the TLX initially attracted admirers, the response was certainly lacked any “wow” factor.

However, the 2018 TLX version is expected to boost sales. But don’t expect too big of a rise due to the formidable competition: Audi A4, BMW 3 Series and Mercedes-Benz C-Class. Infiniti Q50, Lexus IS, and Lincoln MKZ.

Engine choices are unchanged for 2018. That strikes us here as a bit surprising because the TLX has a hard time keeping up with the above-named group of luxury sedans that are known for their superior performance.

Still, this driver wasn’t disappointed by the overall performance of the test model – the V6 version of the TLX. We were impressed by its ability to accelerate in all types of driving situations, especially when employing the sport mode.

The V6 is a 3.5-liter that generates 290 horsepower and 267 pound-feet of torque. The engine is paired with a nine-speed automatic transmission that reportedly shifts smoother and quicker that the 2017 version. This year’s TLX goes 0-60 mph in 6.1 seconds. Trust me, that’s plenty fast, yet it still falls behind many of its notable rivals. Gas mileage is an estimated 21-34 mpg in the V6.

The smaller TLX is a 2.4-liter, inline four that produces 206 horsepower and 182 pound-feet of torque. It has an eight-speed automatic transmission and goes 0-60 mph in 7.4 seconds. It’s more economical on gas than the V6, getting an estimated 23-33 mpg.

Although we don’t have a problem with the two engine choices, we wish Acura would consider adding a turbocharged model to its lineup. It’s a move many of its competitors have already employed.

The Acura TLX provides a refined, comfortable ride that has very little wind or noise of any kind. It handles well on challenging roads and gives the driver a feeling of confidence.

The TLX layout is smartly designed and this year includes an easier learning curve for the control panel. Front seat occupants will love the padded seats and the roomy feel. It’s pretty comfortable in the back seat as well, where the legroom is generous but the headroom may bother some taller folks. Trunk space is average at 13.2 cubic feet.

Thanks to the changes, the 2018 Acura TLX has taken a step in the right direction. It’s more visually appealing and is offered at a price that may have plenty of car shoppers giving it a look.