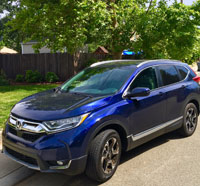 Honda CR-V king in its class

Keep in mind, this is a five-passenger compact crossover sport utility vehicle, so don’t expect the popular CR-V to suddenly become cavernous. But the overall dimensions can only help the CR-V retain its overall status as the king it its class. The Honda CR-V has a tremendous reputation and has been the top selling sport utility vehicle for more than two decades.

When it debuted in 1997, the Honda CR-V was a trail blazer, a car-based SUV that people instantly loved. And because the CR-V was universally admired, it quickly placed other manufacturers in copy-cat mode. There is certainly some competition, most notably the Toyota RAV4, Ford Escape, Kia Sportage, Nissan Rogue and Mazda CX-5.

Increased size is not the most notable quality of the redesigned 2017 CR-V. Honda now offers two engines, a departure from past models. This year the Japanese automaker added a new optional turbocharged engine that gets up to 34 mpg. We’re a fan of turbo engines because they deliver increased performance and boast the gas mileage. The CR-V turbo engine is a 1.5-liter, inline-4 that produces 190 horsepower and 179 pound-feet of torque. The gas mileage ranges from 28-34 mpg.

The other engine choice is a less powerful 2.5-liter, four cylinder that generates 184 horsepower and 180 pound-feet of torque. Gas mileage (25-32 mpg) is not as good as the turbo model.

Honda updated the CR-V suspension, brakes and also revised the all-wheel drive system. The latest CR-V offers steering improvements, rides quieter, and is more agile and responsive than previous models. The new underpinnings have resulted in a reduced body roll when cornering while not diminishing the CR-V’s overall ride quality. Even with the improvements, the highly regarded RAV4 and Sportage offer a better overall ride.

While the new exterior design is no stunning departure, the 2017 CR-V does have a more aggressive look overall. As mentioned, it’s taller wider and longer, and the ground clearance has increased dramatically to 6.3 inches for front-wheel drive models and 6.7 inches for AWD. Other notable exterior changes are reshaped rear windows and a more muscular appearance.

Where the CR-V has typically outshined competitors is the interior. Yet Honda isn’t resting on its laurels and made some nice improvements on the inside as well. The cabin takes on a more stylish look overall, but still manages to keep its well-known user-friendly quality. Although a simplistic thing, we are pleased that Honda added a volume knob. However, still missing is a much-needed knob for tuning.

The CR-V front seat continues to offer good overall head and leg room for the driver and co-pilot. What is new and applauded is the additional room that was added to the back seat. The larger wheelbase has resulted in 2.1 inches of leg room and no hump in the floor, so it’s a more comfortable fit for three folks in the second row.

Honda has managed a redesign that gives car shoppers even more reasons to purchase the CR-V. The addition of the turbo engine is a major plus and another one is the roomy back seat.