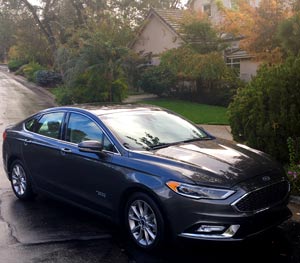 Roseville, Calif. – Choosing just the right versions of the Ford Fusion is similar to a tricky multiple-choice test where all the possible answers seem plausible.

There are a dozen trim levels for the popular midsize sedan. And from this vantage point it seems that all of them have a good upside. There’s also considerable variety when choosing an engine – there are six different ones in the Fusion lineup.

Ford decided to weigh into the relatively new plug-in hybrid technology five years ago, introducing the Ford Fusion Energi as the only plug-in hybrid in the midsize class. Many manufacturers followed and now there is plenty of competition.

We like Ford’s choice in a name, because the Energi certainly conserves. Although it harbors the challenges that all plug-in hybrids face, the Energi can be quite cost effective, considering it gets 41-44 mpg in the combined efforts of the gas and electric power.

The Energi engine is a 2.0-liter, four cylinder that interacts with the electric motor to produce 188 horsepower. It goes 0-60 mph in 8.5 seconds, a full second slower than the Camry Hybrid, probably due to the Energi’s weight of 4,000 pounds.

The good news is the Energi runs forever. In electric mode only, the Fusion has a range of 21 miles – so it is capable of transporting someone to work each day, assuming the commute is short. Some Energi rivals only have a range of 11-13 miles.

Note that the plug-in hybrid makes for terrific transportation on a long road trip. Overall, the hybrid and electric Energi will combine for a super-sized 610-mile journey, so visiting a gas station may never be needed.

Unless you are the very discerning type, it’s difficult to know when the Energi is running on electric only or utilizing gas. Either way, it provides a fairly zippy ride. The Energi has a 7.6-kilowatt lithium-ion battery pack and receives its charge when motion from a second motor/generator driven by the engine and from regenerative braking. When parked, the battery can be plugged in for recharging.

Like its counterparts in the Fusion lineup, the attractive-looking Energi is spirited sedan that possesses athleticism; so it’s fun to drive. The solid handling puts the driver in a good state of mind in terms of control in all driving situations – freeway, around town, and even on a zigzag country roads.

We’re also fans of the interior that features a stylish cabin that looks cool and is efficient. Note that the Energi trunk, which harbors a large battery pack, has limited space (8.2 cubic feet) and can’t store very much due to its bi-level configuration.

We expect Ford will soon be adding to the mileage capacity of the plug-in hybrid and overall the Ford Fusion Energi will continue its residence among the list of desirable midsize sedans.